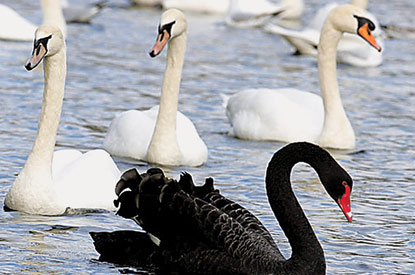 I’ve heard the joke a hundred times, a thousand times, before…

Eve: “Dad, why did the chicken cross the road?”

Eve: “To get to the other side!” (Peals of eight-year-old laughter)

Time for a cold drink. And then, mind blown:

Eve: “Get it? He wanted to get run over, get killed and see what it was like ON THE OTHER SIDE!”

What?! I’ve heard that joke a hundred, a thousand times…but Eve’s interpretation had never before struck me. I wasn’t blown away by the joke, but by the thought ‘How the heck did I miss that?!’ Cognitive bias. Specifically, in this case, confirmation bias, or the tendency to interpret, favor, and recall information in a way that confirms one’s beliefs, experience or hypotheses. There was no need for me to examine what Eve was saying, because I’d ‘heard it all before’- analysis wasn’t necessary.

The list of cognitive biases is long, but has as its common theme the ‘tendency to think in certain ways that can lead to systematic deviations from a standard of rationality or good judgment’. It’s a concept that would have been familiar in 16th century London. The term ‘black swan’ was used then as a statement of impossibility, from the presumption that all swans must be white because all historical records of swans reported that they had white feathers. A ‘black swan’ was impossible, or at least nonexistent. That is, until Dutch explorer Willem de Vlamingh discovered black swans in Western Australia in 1697.

Nassim Nicholas Taleb’s now famous book ‘The Black Swan: The Impact of the Highly Improbable’ focuses on the extreme impact of certain kinds of rare and unpredictable events, and humans’ tendency to find simplistic explanations for these events retrospectively. The main idea in Taleb’s book is not to attempt to predict black swan events but to build robustness to address negative ones that occur, and exploit positive ones. He suggests that hindsight bias and availability bias bear primary responsibility for our failure to guard against black swans, and by way of example asks us to consider a financial instrument that earns $10 with 98% probability, but loses $1000 with 2% probability; it’s a poor net risk, but it looks like a steady winner. Taleb gives the example of a trader whose strategy worked for six years without a single bad quarter, yielding close to $80 millionth- then lost $300 million in a single catastrophe.

It’s these twin ideas, of cognitive bias and managing negative events, which struck me as the UK Modern Slavery Act (MSA) was introduced in March 2015. Section 54 of the Act (Transparency in Supply Chains) requires a commercial organisation producing goods and services and with a total turnover of £36m or more to prepare a ‘slavery and human trafficking statement’, detailing steps the organisation has taken during the financial year to ensure that slavery and human trafficking is not taking place in any of its supply chains, and in any part of its own business. The Act goes on to outline the information that should be contained in the statement, reporting deadlines, and enforcement. The Act declares that the statement must be made publicly available, for example on the company website, and signed off at senior levels within the business. Good news, surely, for the NGO’s, unions and activists who have campaigned for years, demanding that corporates take ownership of and are made accountable for the working conditions in their supply chains.

However… if the organization has taken no such steps, the Act allows for the organisation to say so in its statement. Surely, if one were to compile a list of paper tigers this Act would make an appearance? Possibly not. In 2006, the Guardian newspaper and others reported that the world’s largest pension fund, managed by the Norwegian government, was boycotting Wal-Mart, the world’s largest retailer, for alleged “serious and systematic” abuses of human and employment rights in its supply chain. The Norwegian government stated that its $240bn oil fund would no longer invest in Wal-Mart, and that it had sold its holdings worth about $430m. Wal-Mart’s share price dropped by 0.5%. More recently European investors who have parted ways with Wal-Mart have included Sweden’s AP Funds (worth a combined $140 billion), the Netherlands’ largest pension fund ABP and Dutch asset managers PGGM and Mn Services. Labor and human rights concerns, corruption allegations and environmental practices have all been mentioned as driving forces behind those Wal-Mart sell-offs.

Wal-Mart’s experience is not an isolated one. A study conducted by the Sloan School of Management at MIT found a correlation between stock performance and corporate social responsibility (CSR) in firms over a three-decade period from 1980 to 2009. The study examined the impact of positive and negative events on companies’ stock performance. Following an eco-positive event, a company’s stock typically rose an average of 0.84 percent in the next two days, while eco-negative events caused stock prices to drop an average of 0.65 percent. The impact of eco-negative events caused a greater decline with each passing decade- 0.42% in the 1980s, 0.66% in the 1990s and 1.12% in the 2000s, showing that investors are becoming more aware of the importance of CSR. Another study, conducted by the Ethical Investment Research Service, found that ethics-related news influences a company’s share price for better or worse, revealing effects of between 0.5% and 3% of share price.

And so, where does cognitive bias come into play? I recently sat in a meeting where a number of companies, all with turnovers in excess of £36m, and listened to a presentation describing the Modern Slavery Act and its requirements. Initially, concern was high until people realised- the threshold for compliance was low (a statement on a website, even stating that no action was being taken!), and although non-compliance may result in a company being subject to a court order (and an unlimited fine if the company fails to comply), who in their right mind would allow that situation to arise? Past experience told them that, so long as they complied with the law, they were on firm ground- no further analysis was needed. What they failed to realise, though, was that the ground had just shifted. ‘Transparency’ in the way it is constructed by the Act is not a necessarily a legal compliance issue, but is in fact a reputational and, more broadly, a governance issue. The Home Office guidance document ‘Transparency in Supply Chains etc. A practical guide’ released in October 2015, makes this point clear:

‘1.4 …The measure is designed to create a level playing field between those businesses, whose turnover is over a certain threshold, which act responsibly and those that need to change their policies and practices…

2.8 …a failure to comply with the provision, or a statement that an organisation has taken no steps, may damage the reputation of the business. It will be for consumers, investors and Non-Governmental Organisations to engage and/or apply pressure where they believe a business has not taken sufficient steps.’

When the UK Ethical Trading Initiative (a tripartite organisation whose members comprise major companies, NGO’s and unions) wrote its ‘Position Statement on Modern Slavery Bill’, it confirmed that most of its members supported  ‘legislation…that levels the playing field for all UK companies’. Why would large corporates support legislation? In part, because over the years many of the corporate members have made significant investment in developing and implementing responsible sourcing programmes. A requirement to make public such efforts would highlight a point of difference between those who have made such an investment, and those who have not.

And the court of public opinion can be a harsh one. Numerous polls over the years have highlighted the fact that consumers, and the public at large, are very concerned about social and environmental issues- Gallup quotes an average of 55% of those questioned over the past 10 years. Failure to understand public opinion can be disastrous. ‘Ratners’ was a chain of jewelry stores operating in the UK through the 1980’s, until CEO Gerald Ratner made a speech addressing the Institute of Directors in 1991. During the speech, he commented:

“We also do cut-glass sherry decanters complete with six glasses on a silver-plated tray that your butler can serve you drinks on, all for £4.95. People say, “How can you sell this for such a low price? I say, “Because it’s total crap”.”

After the speech, the value of the Ratner group plummeted by around £500 million, which very nearly resulted in the firm’s collapse. Ratner sold a majority of the company’s shares in an attempt to save his business, but was subsequently fired by the new company leader in November 1992. More recently, the Guardian newspaper reports that car sales at Volkswagen have dropped 10% since the 2015 emissions rigging scandal.

And so, how will this play out? There are approximately 12,000 companies in the UK which fall under the provisions of the Modern Slavery Act, and which will be expected to make a statement available to the public in 2016. The human rights and environmental activist community, which have lobbied for such transparency for some time, will no doubt be preparing to review, tabulate and publish their analysis of corporate efforts. There are numerous examples where such activism has resulted in changes in law, and in corporate behavior, in a manner that has proven remarkably effective over the years. In 2010 Professor of Finance Hoje Jo of the Leavey School of Business, along with colleagues at Stanford and Pepperdine, analyzed data from 3,000 companies during an eight-year period and set out the findings in a paper titled “The Economics and Politics of Corporate Social Performance”. Jo compared companies’ financial performance with their social performance, and took into account social pressures on firms from nongovernment organizations and activists. The conclusion?

“Social pressure could have a direct effect on the financial performance of a firm if it causes consumers, investors, or employees to shun the firm. Social pressure could also damage the reputation of the firm or a brand, and it could portend future problems arising from private or public politics.”

The ground has shifted, and time will tell where the new equilibrium lays.

Chris has over twenty years’ experience managing social and environmental programs for the supply chains of national and multi-national Fortune 500 companies in Latin America, Europe, Africa and Asia.